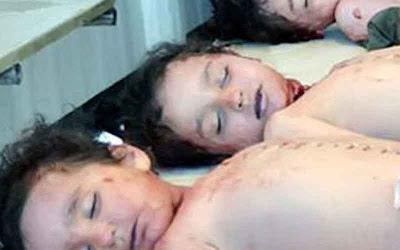 An Egyptian man killed his three young daughters aged 7, 5 and 3 by letting a poisonous snake bite them.
According to 'Al Youm Al Sabea’a' newspaper, the three kids were found dead in their bed in Bani Mazar town of Al Minya governorate of upper Egypt.
Forensic reports confirm the kids died due to snake poison.
The man allegedly bought two cobras and let them bite the children while they were asleep so as not to be caught. He was divorced from their mother because he doubted her. He alleged that the chidlren's mother was in a relationship before marrying him and, therefore, denied that he fathered the kids.
But she insisted he support the three daughters. However, when his second wife gave birth to a boy, he decided to do away with the children, he confessed to police under arrest.
Posted by engee at 15:19

Quote of the Day